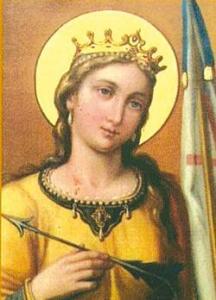 The legend of Saint Ursula is based on a 4th- or 5th-century inscription from the Church of St. Ursula, located on Ursulaplatz in Cologne. It states that the ancient basilica had been restored on the site where some holy virgins were killed. In Jacobus de Voragine’s Legenda Aurea (1265–66; Golden Legend) Ursula is a British princess who went to Rome accompanied by 11,000 virgins and was killed with them by the Huns on the return from the pilgrimage. Although it is generally agreed that Ursula was of Romano-British descent and that prior to her untimely demise she was betrothed to a man of high rank and was completing a holy pilgrimage through Europe to Rome before her marriage.

Ursula was raised up by God to preserve the maidens and widows of her time from seduction and dishonor, and to enroll them in the celestial army of crowned martyrs. She accomplished her mission with extraordinary energy and constancy, with the guide of The archangel Raphael who appeared on her dream.

Ursula had vowed herself to God since at the young age. She was not exactly beautiful; she was tall and strong, resolute and energetic, of a very grave countenance and masculine bearing. She was, at the time of her martyrdom, thirty-three years old.

A warrior, powerful and renowned, requested of her father the privilege of witnessing the exercises of the maidens of whom he had heard so much. Though embarrassed by the request, Ursula’s father dared not refuse. He tried, at first, to put him off; but the man insisted until he gained his point. He was charmed with Ursula’s skill and beauty and at once, asked her in marriage, saying that her young companions should espouse his officers in a country beyond the sea not yet peopled. END_OF_DOCUMENT_TOKEN_TO_BE_REPLACED